Reining in on the horse related puns… It does seem that the music industry needs to have a good sit down in a darkened room and have a quiet word with itself. It’s hard to remember a time when the radio has been so painfully difficult to listen to and popular music been so laughably bad. 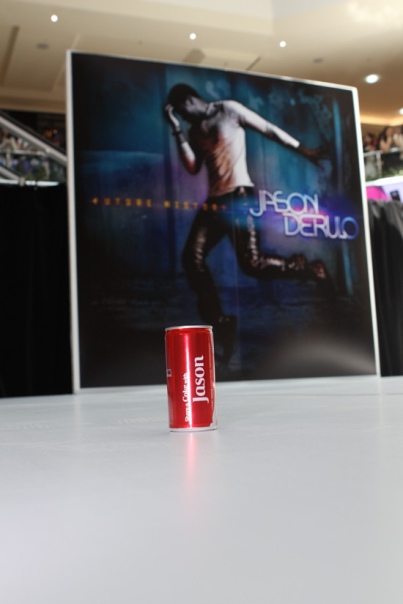 A coke can for Mr. Derulo as he clearly always forgets his name. (SOURCE: Eva Rinaldi’s Flickr photostream)

Messrs Guetta and Derulo seemingly engaged in some kind of battle for the already blanched souls of the world’s youth. What’s worse is they love it. They really love it. Try and point out that it’s unmitigated shite without any redeeming features, that it’s musically immature, emotionally stunted and sexist to the point of being insulting to the collective intelligence of every woman in the world (take a bow Derulo and Thicke). If you were to point out these unassailable truths, you would be met with derision for being too old to understand and probably you would be called a dick.

And that’s fair enough. I called by own father a dick when he likened Radiohead to the sound of “a fella being drowned in a river in the fog” and said he “wouldn’t open the back window if they were singing in the yard” in relation to Jurassic 5. The difference is that he was wrong and we on this occasion are right. It’s piss poor music for people who don’t really like music.

You may well point out at this stage that the singles chart has always been insufferable bollocks chosen by the pre-pubescent and the lonely and… yeah, it has but it used to be a battleground. Where there was “Blue Da Ba Dee Daba Da” there was Blur and where there was Crazy Frog there was Belle and Sebastian. Recently it seems the war is has been lost. Top to bottom, song after song with no heart.

Please don’t feel I’m focusing unfairly on the boys. The women are letting the side down just as badly. Forget Regina Spektor and Karen O. Step forward Perry, Minaj, Swift and She Who Must Not Be Named… Ke$ha. These lot make Spears, Aguilera and ol’ humble tits herself Shakira look like excellent role models for youngsters the world over.

It’s Cowell and his ilk. That merry band of music killing morons determined to suck the last dying breath from an already choking music industry. If we allow the musical gene pool to become so stagnant that Simon Cowell is everyone’s daddy then the end result is a music industry born of incest.

Think of One Direction and their compatriots as sperm swimming away up the musical fallopian tube. Not our fastest swimmers I think you’ll agree. So One Direction (living up to their name in fairness), arrive at the egg which bears a striking resemblance to Danni Minogue who smiles beatifically down at tiny Harry Styles (she is 85,000 times bigger than him after all). He wiggles in and as they say, Robert’s your mother’s brother. Now repeat the process again and again and therein lies the problem. Lots of musical halfwits releasing songs with cunning titles like Best Song Ever, kicking their arms and legs at the same time on the musical swings and hobbling around and around the musical chairs.

I suspect many people out there would blame the internet for the decay of the once vibrant music industry and not many would object to that assessment. Radiohead’s Thom Yorke for example, described Spotify as, “the last desperate fart of a dying corpse.”

It’s hard to disagree with him when it would seem that a great (great) many of us have completely given up on paying for any music at all. A point aptly demonstrated when Radiohead’s In Rainbows was released and fans allowed to pay whatever they chose. The end result was 62 per cent of us decided that what we wanted to pay was nothing. And bearing in mind that was in 2007… I don’t think that percentage would change for the better today.

The result seems to be that to succeed you’re better off appealing to the majority. And considering the meteoric rise of Bieber and Swift I’ll just hold off on putting my faith in the wisdom of crowds.

There are of course more holes in my argument than in the rationale of a pro-gun lobbyist  and there are of course amazing musicians and bands coming out all the time, like The Tallest Man on Earth, The Milk Carton Kids and Cosmo Jarvis just to name a few (pardon the plug), but I think the point I’m making so badly is that for once wouldn’t it be nice if the biggest band in the world was the best band in the world?