To my subscribers/loyal followers/social stalkers, you may be wondering why I haven’t posted in a while. Well for the past five weeks I have been travelling the good ole US of A and have been absolutely loving it! You may also notice that I am using my given Christian name and not the Black Widow moniker, and that’s because I left the Black Widow at home as I (Noah) went on a much needed vacation.

I made it a point to not blog about my travels while travelling, because how are you supposed to enjoy your travels if you’ve set yourself a deadline for that night? So now, regrettably, I am home in bed and am now going to write down every thought and memory I have of my five weeks abroad and why they qualify to be the greatest times of my life.

My online travel diary will be separated into three parts: Family Bonding, Contiki Craziness and Black Widow Mourning, as my travel was separated. For the first portion of my holiday, I travelled with my two sisters (Toni and Stacie) and my maternal cousin Tayla.

If you weren’t already aware, this was my first time travelling outside of Australia, and going into this holiday, I was absolutely frightened of flying. Combine that with my younge naïvety, general gullibility in life and dough-eyed expression, and you have yourself a very new, inexperienced traveller. Luckily, Toni and Stacie were expert travellers and they basically hand-held me through flying, customs and all of that jazz.

After experiencing the WORST flight of my life from Sydney direct to LA, more waiting around and a pretty breezy flight, we were in San Francisco, California. I had very limited knowledge of San Fran: it was one of the gay capitals of USA, was home to Alcatraz and the Halliwell Manor from Charmed, and reminded me of the film The Sweetest Thing starring Cameron Diaz. Other than that, I was open to surprise. I was still blown away by the fact that I was standing in a different country.

Tayla went off and did her own thing as the siblings went on a guided tour with a bunch of old people who were very hard to please. We saw a few of the sights that San Francisco had to offer, one being the Golden Gate Bridge, of course, which was breathtaking (and also reminded me of that X-Men film). The tour guide was very wise in his old age, and his voice was soothing (so much that I fell asleep on the bus). He gave us some great insider points of what to do and how to do it. 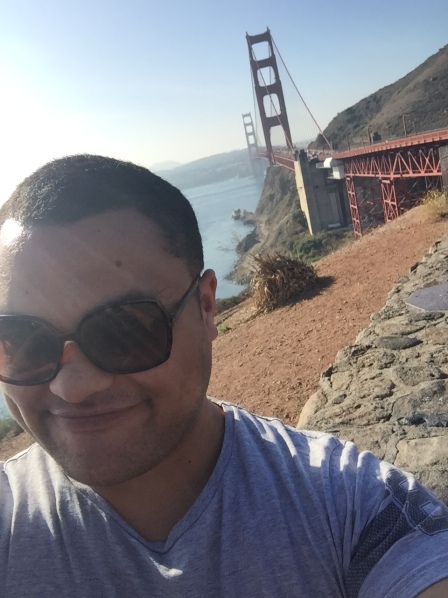 Later that day, we got to tour Alcatraz, which admittedly I wasn’t too impressed with. Like, it’s a prison on an island. It can’t be that great, right? WRONG. Alcatraz was probably the highest point in San Fran for me. It had so much history and darkness on the one island and the helpful audio tour clearly illustrated the stories for me as it felt like I was witnessing them first hand. It might be a bit dorky to say, but I like learning about different things in different places.

Another exciting part of the San Francisco experience (other than their giant Victoria’s Secret which had me frothing) was the cool cable car that we got to ride. You know those cool ones you see in the movies where people are standing up, kind of awkwardly hanging outside, holding onto a pole as they grind their crotch into a stranger’s face? Yes. That one. Minus the crotch grinding. 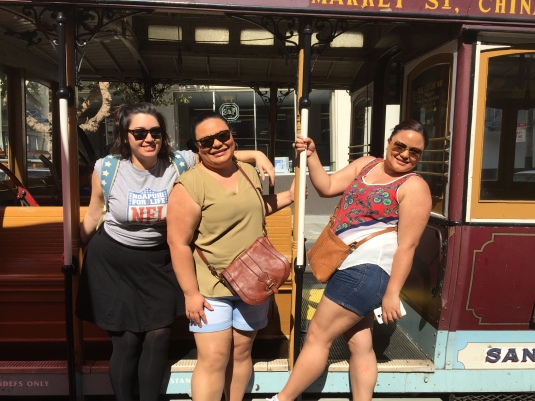 Oh, and it was like Fleet Week or something in San Fran at the time as well, so there were lots of different kinds of officers in town and their ship thingies were darting around the sky. (I’m aware ship thingy isn’t the technical term for it, but bear with me). It was exciting to watch. Hella loud, but still exciting. 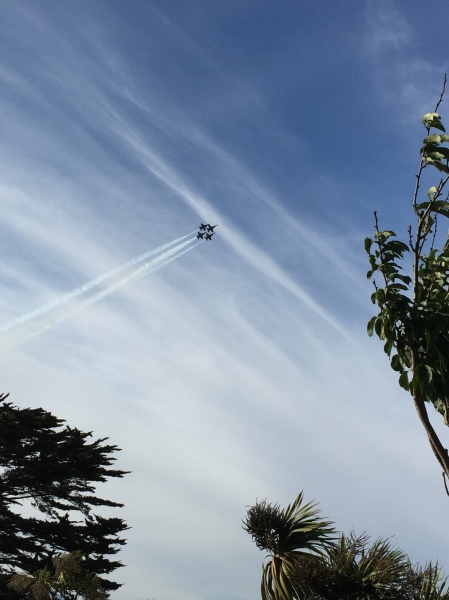 The second stop on my family holiday was Orlando, Florida: the home of Disney World and Universal Studios Orlando. Admittedly, I’m not that much of a ride person because heights will be the death of me and I get motion sickness easily, so one can wonder why on earth did I choose to go to Orlando over New York, but I actually thoroughly enjoyed Orlando.

We spent two days at Universal Studios, which was easy to get to as the resort we were staying at (Cabana Bay Beach Resort, definitely recommend) is a Universal resort and provides free shuttles to and from. Universal is magical: from Harry Potter World to Simpsons Land and then Marvel Land, the place was phenomenal. Motion sickness got the better of me on day one but by day two, I was ready to take it. We had fast passes to the rides so I had no real choice but to go on them whether I wanted to or not and, with my eyes shut on most of them, I can say I enjoyed them. The highlight of Universal, for me, was definitely Simpsons Land.

See? How can you not love that?

Three of our Orlando days were spent at Disney World, hopping between the four parks: Magic Kingdom, Animal Kingdom, Hollywood Studios and… Epcot. I don’t understand what an epcot is but whatever. To each their own. In my opinion, Universal had an edge over Disney World because the latter is obviously tailored to the children in attendance, so there’s me eyeing toddlers jealously as the hippy turtle from Finding Nemo has a conversation with them and not me.

The rides in Disney World were largely entertaining although I found a heap of them, especially in Epcot, to be educational. Like, I’m all for learning about new things and experiences, but probably not when I’m sitting on a ride expecting to be thrilled.

My favourite park of the four was definitely Animal Kingdom, mainly because I’m an animal lover. The highlight for me in Disney World was seeing a beautiful, proud lioness sitting on her perch just overlooking everyone and everything. Seeing her for the three seconds that I had was magical. Lionesses are some of my favourite animals because they are the epitome of a boss ass bitch. Did you know that contrary to popular belief, lionesses are the ones that hunt while their male counterparts just sit there and wait for their women to do all the work? Bitch you better work.

Oh, and I dragged everyone to the Frozen sing-a-long show and knew every word to every song, along with all the other four year old boys and girls. Unfortunately I did not get a photo with Elsa or Anna or Kristof or even Olaf. Let the tears flow.

The third stop on our family trip was Salt Lake City, Utah. This wouldn’t be a stop on our trip if our grandfather didn’t live there, but he does, so we spent a few days here. There’s nothing really to do in Salt Lake so it acted as a rest stop after the madness that is Orlando.

So, get this right, I get off the shuttle from my Orlando resort to the airport and I look down and… hey! My bag is still in the van! Long story short, he brought it back an hour later and I missed my flight. But it was a blessing in disguise, as it taught me how to navigate the horror of an airport by myself. Something I so sorely needed later in my holiday.

What Salt Lake lacked in fun, it had in family. It was great to see my handsome grandfather again and to catch up with uncles, aunts and cousins.

I also attended my first college football game, which was definitely an experience. Australian sport is very different to American sport in that the latter is very stop-start. I’ve watched some NFL games before (GO THE PATS!) so I knew that what SHOULD take like two hours usually goes for six, but to sit there and actually witness it was some next level shit. I mean, some girl casually won a car in a first quarter break. No, not even during halftime, just a random break in the first quarter.

Not only was I reunited with my family but I was also reunited with my long distance BFFL! He spent the whole day taking me around to different malls so I could find my Julian Edelman jersey (which I did). He also took me to some other places that I care not to mention, but spending time with him was present enough for me. 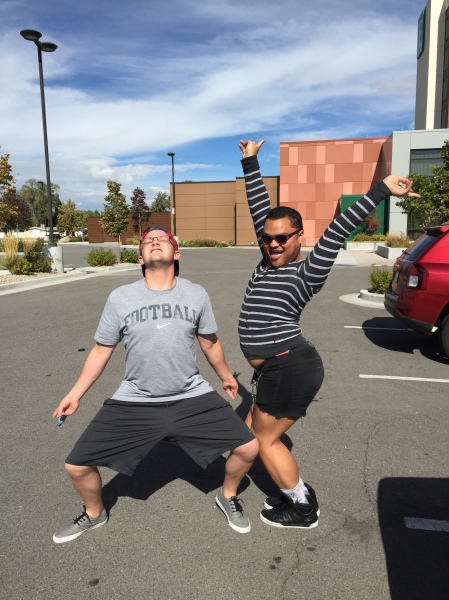 Our final stop was Las Vegas, Nevada, which was for one night, but I was going to be there again like a day later so it didn’t bother me. Tayla and I got to sample the nightlife in Vegas which was AMAZING: we went to the ice bar which was fun had there been more people there, played a few rounds of Blackjack where I lost $40, drank drank drank and then went to the Coyote Ugly Bar and Saloon which was fun. But it was a Tuesday. Lots of places were shut, so our night ended early unfortunately.

So after almost three weeks travelling with the family, it was time for them to fly back home and for me to continue by myself. We flew back to LA and I bid farewell as I made my way to my hotel in downtown LA which was hella povvo to be honest, but it had to do.

My Contiki journey was about to start, and I was really excited for it.

Let’s not talk about the hundreds and hundreds of dollars I spent in this first portion of my trip due to the bad influence of my sisters and Brandon. Such terrible, terrible influences they are.

Part 2 of my travel journey will be posted quicker than you can say “Brutus is just as cute as Caesar.”