While we’re all busily exclaiming what a wonderful time of the year Christmas is, we tend to forget the all the bad things that happen in December, too. The injuries we get as we rush around like crazy people trying to make the season as magical as we can.

We all go a little nuts at Christmas. Stress mixes with joy mixes with alcohol mixes with the general vexation at having to spend time with our extended families and we start to make mistakes. In fact, if OH&S had a say in the matter, the nine lords wouldn’t be allowed to leap. They’d be allowed to walk slowly and carefully in an orderly line to avoid hurting themselves and/or others. 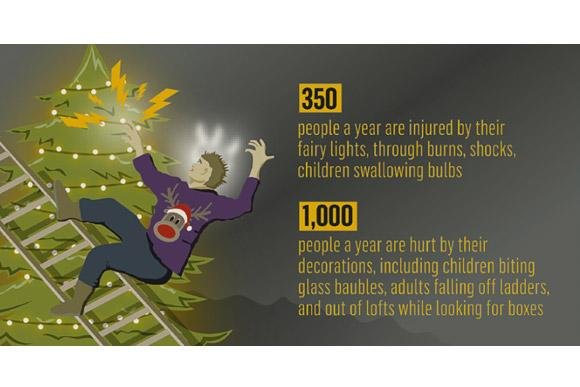 KITCHEN
Christmas Dinner is possibly the most important meal of the year. We’re out roasting pork in the webber, prawns on the bbq and all manner of baked goods in the oven for dessert. It is almost impossible to escape this meal unscathed – each year we all gain burn scars (battle scars) as a reminder of what a wonderful dinner we managed to serve our family despite all the hot grease and sharp knives that tried to thwart us.

THE TREE
I know you’ll hate me for saying this, but you are not as strong as you think. The Christmas tree you chose is actually heavier than you think. Trying to lug it around yourself will cause a hernia.

Also, the tree is no doubt much taller than you. If you’re trying to get the star to sit perfectly on top, please use a step ladder. Standing on your tiptoes on top of a chair balanced on a phonebook is not as genius as you might think.

CHRISTMAS LIGHTS
Did you know that there are people out there who are Professional Light Installation Specialists? Their job is to set up full-on scaffolding and harnesses to use while they decorate your house. Why? Because every year, more than 10,000 Australians get admitted to hospital with injuries sustained from falling off their roofs while they put up the lights. The last thing you want to be eating at Christmas is applesauce because you’ve had your shattered jaw pinned shut.

I don’t know the statistic for this one, but a lot of DIY Dads end up in strife when they try to ‘fix’ last year’s Christmas lights and wind up electrocuting themselves.

FOOD
Christmas wouldn’t be Christmas in Aus without prawns on the barbie. Unfortunately, some novice chefs haven’t quite mastered seafood yet and wind up giving their family food poisoning for Christmas instead of a My Little Pony and a cricket set.

ALCOHOL
The number of booze-related injuries that happen over the Silly Season is astronomical. There is no limit to the hurt people inflict on themselves when they’re six or seven drink in. With that said, I warn against the obvious- don’t drink and drive. No matter how ‘fine’ you think you are, it’s not worth the risk.

Also, don’t run in heels, chop anything with a sharp knife, get in a bitch fight with your drunken Auntie, decide swimming would be a great idea at 2am, do table dancing or strip teases, wrestling,  lick anything you normally wouldn’t, jump of the roof because you’re “obviously Batman” or confess to your mother-in-law that, yes, her bum does look big… in everything.