I know there is a recurring theme of country musicians featured as our Artists of the Month, but bear with me.

Even if you aren’t a country music fan, if you watched the most recent Grammy’s, you’ll have a fair idea of who Little Big Town are. They are the group of four (two men and two women) that won the Grammy for the Best Country Duo/Music Group Performance for their hit song Girl Crush, and they also had the honour of performing that song on stage. 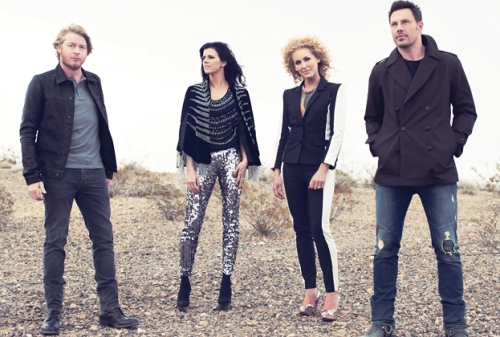 Much serious in one picture.

In a music genre that is so traditional, it should come as no surprise that Girl Crush certainly pushed the barriers and stirred a lot of controversy between country music fans . If you hear the song playing, you will envision a story of a woman being obsessed with another woman and wanting to be her lesbian lover. If you actually listen to the song, though, you will witness a story of a woman who is in love with a man who is actually with someone else, so the first woman wants to be the second woman so the man will love her instead. Sounds like a standard love song, right? Well, with lyrics like “I want to taste her lips, yeah ‘cos they taste like you“, it’s easy to see some would think why this song is about same-sex romance.

The song has stirred up a lot of controversy, but if you just ignore the unnecessary critical attention to the song, it’s actually a beautiful love ballad? Karen’s vocals in this track are actually phenom, and if it were anyone else singing, I don’t think this song would have been as great.

Oh, speaking of, meet the members that make up Little Big Town. From left to right, we have Phillip Sweet, Kimberly Roads Schlapman, Karen Fairchild and Jimi Westbrook (#DamnDaniel), with the latter two of the four being happily married since 2006. 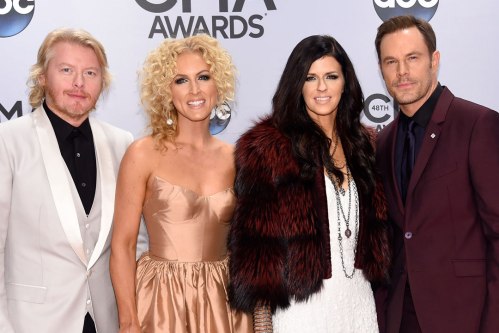 Little Big Town were formed in the early 2000s, but their career never really picked up momentum until 2006 with the release of their single Boondocks, the first single from the album The Road to Here, which became their first top 10 hit on the US Billboard Hot Country Songs charts. This was really the catalyst behind their kickstart to stardom, because ever since then, Little Big Town have been a big player in the country music genre, and their star power has only grown exponentially.

My personal favourite Little Big Town song Tornado emerged from their fifth studio album which was called – GASP! – Tornado. While one would naturally think that this song would be about a natural disaster, it actually details a woman’s anger towards her unfaithful man. “Yeah, I’m gonna lift this house. Spin it all around. Toss it in the air and put it in the ground. Make sure you’re never found.“ Like, damn girl.

It doesn’t seem as if Little Big Town’s momentum is going to be stopped any time soon, so while I’ve got you here, here are a few recommended tracks for your entertainment:

And I will leave you with the plain and simple music video that shook the traditional world of country music.