No one ever likes attending an event by themselves. It is actually very preferable that you don’t go by yourself. But when it comes to something you’re so bleedingly passionate about, you’d be willing to overlook that fact if you couldn’t take anyone with you, right? Well, that’s what I did when I attended this year’s Dally M awards. 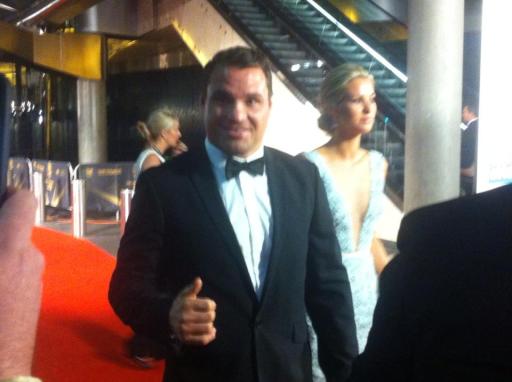 Rocking up to the Star by myself and waiting in the registration line by myself was a bit daunting. After being escorted to the red carpet (behind a security gate unfortunately), the stars rolled out and I was literally starstruck. It was big star after big star after big star – Anthony Watmough, Adam Reynolds, Jake Friend, Paul Gallen, Jared Waerea-Hargreaves… they kept popping out on the red carpet. I didn’t get any pictures with them but I got a few of them. I got to speak to Greg Inglis for a hot second as well, which was bloody amazing.

After the red-carpet shenanigans were done, the registered fans in attendance were hurried off to the Marquee room where we received free drinks and a complimentary meat pie or sausage roll. Seeing as I’m a vegetarian, I got my fill in of free bevs.

We were sat down in the top seating area for the Dally M’s in the main room (I got a pretty decent seat) and were (unfortunately) treated with a Justice Crew/Timomatic performance. Kudos to both of them for doing well in their careers but I personally do not care in the slightest for either of them. The awards finally begun and I have to say the production was terrible. There were a few lengthy gaps in between announcements and it just looked as if the crew didn’t know what they were doing.

The award winners were as follows:

I definitely recommend attending a Dally M ceremony to all of the NRL fans out there. I got close to the Burgess brothers, had Beau Ryan do the Whakatane pose right in front of me and witnessed my favourite Corey Parker rightfully gain Lock of the Year. I may or may not have shouted “YES!” in triumph while the room was dead silent when this happened. It was an absolutely amazing experience and it was free as well!