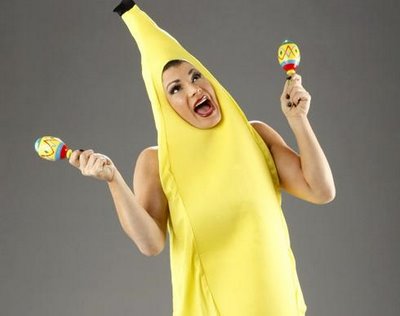 Because really, if you were to ever dress up as something… it’d be a banana.

Last night, I noticed a group on Facebook deftly titled “Halloween is un-Australian” and that really got to me; sure, Halloween might not be your cup of tea as an Australian and that’s completely fine. To others, however, Halloween is a perfect time to dress up and have fun with friends and family by walking around, asking for treats and comparing costumes with one another. Why would you dampen someone else’s fun just because of your own personal beliefs? Just as much you shouldn’t condemn someone for their religious beliefs, don’t stop a whole bunch of people for believing that Halloween is a time of fun and spookiness.

Anywho, the team at SolSat are ready for Halloween and here are the costume ideas we have planned for today’s events:

Nikki
As the major Halloween enthusiast I am, I’ve organised for my college newsroom to dress up for Halloween. What newsroom dresses up for Halloween? The best newsroom in the world! For the day, I have decided to spice up an old costume of mine – instead of being “sweet innocent Little Red Riding Hood who was eaten by the wolf and eventually saved by a huntsman”, I’m dressing up as “demon Little Red Riding Hood who grabbed an axe and slashed that wolf into pieces”.

For this costume, I have a red riding hood (obviously), a white shirt, denim cut offs and brown boots. The cool part, however, is the plastic axe I will be carrying with red texta at the end of it… wolf’s blood and what not. For extra dramatic effect, I’ll be drawing red claw marks down the side of my face because gosh darn it that wolf did put up a fight. Instead of a cane basket, I have a skull candy bag. Demon Little Red Riding Hood? I think so.

For the night’s events, I will be attending a Halloween party at a local night joint and wanted to dress up as my favourite comic book character ever – Harley Quinn. Harley is a woman, however, so I made the man’s version of it and I can be so bold as to say that my costume is excellent.

For this costume, I have red-and-black split-leg jeans, one red Chuck Taylor and one black Chuck Taylor, a split-coloured black-and-red shirt with diamond pieces sewn onto it and a harlequin/court-jester handband with white and red face-make up. Can I get a soooo weeee?

As a kid, the closest I ever really got to celebrating Halloween was watching The Simpsons’ Treehouse of Horror special episodes.
My family have always been pretty indifferent to the whole concept. The modern bastardisation of the traditional Pagan celebration is a very American idea which has no relevance to Australian history or culture so we just didn’t feel the need to get involved with it. Plus we lived on a farm roughly 15km from the closest town, so ‘Trick-or-Treating’ would have been fairly arduous.

For the guys, it’s mostly just the one night a year when cross-dressing is not only socially acceptable, but pretty much expected (remember boys, shave your legs if you’re planning on wearing tights- the itch will destroy you if you don’t!).

With that said, I absolutely adore making and designing costumes and would love to have an excuse like Halloween to go all out and create my dream outfit. As cliche as it is, if I were to ever go to a Halloween Party, I would want to go as Glinda from The Wizard of Oz. I will forever associate Halloween with little kids and Glinda was a character I loved so much in my own childhood, so I would definitely owe it to 7 year old Blaire to go as the Good Witch. And rest assured, Little Me, I’d go all out. Big white gown with the petticoats, lace and beads with a big silver crown and sceptre. I’ve got nineteen years (and counting) to make up for, you can bet I’d do it right!

– by The Black Widow and Blaire Gillies