For the seventh day of Christmas, I have prepared a list of seven Christmas inspired cocktails. 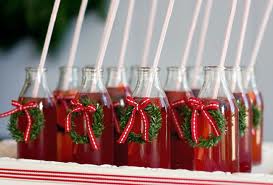 This a cute serving idea for your next Christmas shindig!

The Chocolate Candy Cane tastes exactly as you would expect it to from the name. For something special, you can also serve it over a small scoop of icecream!

Pour all the ingredients – except for the cinnamon powder – into a martini shaker. Mix for ten seconds until combined. Pour into chilled glass, sprinkle cinnamon powder on top. Serve with Cinnamon Stick.

Combine in a chilled glass for a refreshing citrus cocktail.

Recommended by friends of mine who have this for ‘after-dessert dessert.’

Super quick and easy to make!

An edgier, seasonal alternative to the classic cosmopolitan.

This is tart and delicious- easily one of my personal favourite cocktails!

Drink up, my friends, just six more sleeps until Christmas!!