With the hype surrounding the now not-so-new release of American Hustle and the consequent criticism it’s acquired (though to a much lesser extent), curiosity eventually got the better of me so I decided to go and see it for myself to consider whether both the positive and negative reactions surrounding it are justifiable. 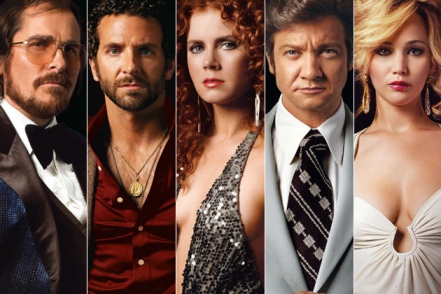 Such an attractive cast…

American Hustle is a drama film based on a true story; it begins with some onscreen text stating, “some of this actually happened.” A little surprising that the usual “based on a true story” isn’t employed but heck, it still works. It follows on with quite a few flashback scenes with alternating voice-over narration from two of the main characters; Irving Rosenfeld (Christian Bale) and Sydney Prosser (Amy Adams). In fact, a little less than half of the film consists of some of their past moments and it gets a little tiresome at first – mainly because you just want to see what’s happening in the present, but it soon becomes clear that the flashbacks are crucial in understanding the present scenes. All in all, it starts off a little slow but soon smoothly eases into an intriguing ride.

From the flashbacks, we learn that Irving and his mistress and partner in crime, Sydney, are two con artists who cheat money out of their clients (or perhaps victims is a better word) through the ruse of a loan service business (of sorts). Having met a while back, they had decided to join as both lovers and business partners. On the sideline is Irving’s wife, Rosalyn Rosenfeld (Jennifer Lawrence) and their son (hers from a previous relationship whom Irving chose to adopt), although Irving does seem to be a doting father to the boy. To cut to the chase, one day their client/victim happens to be an FBI agent by the name of Richie DiMaso (Bradley Cooper). He eventually finds out about the illegitimacy of their “business”, and gives them the alternative of either facing an arrest or helping him arrest others (whom he suspects of obtaining illicit money). For fear of revealing too much about the film, I’ll stop there with the plot and storyline.

As it’s set in the 70’s (1978 to be exact), there’s a lot of typical fashion of the era – and very convincing it is too. There’s also plenty of glam attire and style – bar Irving’s comb over and Richie’s perm (although I will admit Bradley Cooper looks rather cute with those tight curls – don’t judge). Apart from the glam fashion, the film itself is rather glossy and suave – and I suppose this is where some of the criticism sprouts from. For, although it ticks just about every box for me – great acting from a great cast, absorbing plot, perfect filming in terms of pace and technique, and all the finer details such as accurate depiction of the surroundings etc – it feels as though there’s a little something missing. It could be that too much attention was paid towards creating a somewhat swanky feel to the film; at times it feels like it’s a little too polished or clean-cut, which doesn’t seem to suit the more serious tones that the plot would otherwise impart, or perhaps there isn’t as much depth and/or history behind some of the characters, leading to a slight lack of substance to the film as a whole. It could also be that there are a little too many injections of humour throughout (which again somewhat detracts from the more serious tones). Although I will say that some of the humorous dialogue included is pure gold in its simplest form, and provides a refreshing dose of comic relief (although again, I’m not sure if it’s needed). Or maybe I’m just being a little too nit-picky…

Nevertheless, this is still a must-see for those who love a good old drama movie; as aforementioned, the acting from the majority of the cast is top-notch (for those who have yet to see it, watch out for Jennifer Lawrence especially, who does an excellent job of portraying an emotional, stubborn, ignorant, slightly neurotic (and sexy) wife), the filming execution is great (one of the best I’ve seen in a while), and the plot – although a little seemingly dull and slow at the start – slides and then propels with a bang into an escapade that you just can’t stop watching until you’ve reached the end (where there’s a clever, spun out twist that’s either satisfactory or unsatisfactory – it’s a matter of opinion). Because of all this, it’s a true winner with some very minor faults in my opinion, and that’s why I give it a solid 8 out of 10.

One thought on “Review: American Hustle”