I want to take a little time to recall some brilliant films. Do you remember a movie about a child who could see and talk to dead people? I do, and I remember it being full of genuinely frightening moments and an atomic bomb of a story twist; this was The Sixth Sense, directed by M.Night Shyamalan only fifteen years ago. 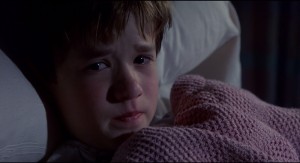 This is what everyone looked like watching it, don’t lie.

I also fondly recall watching Unbreakable for the first time, which also contained a mind-shattering twist and a damn good cast of actors; again, Shyamalan is responsible for creating this cult film.

And here is where the problem comes to light; can you recall a film about trees who make people suicidal? If you can’t, pat yourself on the back, you really saved yourself time and sanity. The Happening was also the work of Shyamalan, the same guy who created instant classics and then went on to produce pieces of actual poop.

I have tried to keep calm in the face of such terrible film making, telling myself that it’s okay. Maybe he’s a one trick pony and theres only so long he can make twist endings work, maybe his first few movies were some sort of fluke, a moment of his insanity that happened to work. I did this over and over: with films like The Village, and Lady in the Water. But god dammit if I’m not tired of trying so hard. Not after what he did, not after making The Last Airbender.

One of the best television shows

One of the worst things in my life (Sorry, kid)

Shyamalan, if you’re out there and somehow reading this obscure article: WHAT THE FUCK, MAN? You don’t do that. You just can’t take a wonderfully-written, highly-praised, beautifully-animated television show, take all the good things out of it, and drop it on the big screen. I wanted to stick by you, even through the awkwardly directed acting and plot holes, because although I’m always disappointed by you, your films always seem to have an interesting premise. But no, you really fucked up this time.

But even amidst that awfulness there seemed to be a silver lining; this film was so bad that there was no way he would ever direct again. Then came After Earth (vomiting sound), and now he is in the mix to produce three different television programmes, and heres hoping that he just stays as the producer.

The purpose of this article was to mostly rant, but also to voice my genuine concerns. Why does this man keep making films? Who keeps giving him the work? And more importantly, how do we stop it? This is coming from someone who really loved the film Signs. In all seriousness, that movie planted the seed for my phobia of extraterrestrials, and any person that can induce that has some amazing power. But I think that power has been abused and needs to be taken away.

One thought on “I’ve Given Up On M.Night Shyamalan”