More specifically, should I say, confessions of a fangirling Thefthead.

On Saturday March 15 2014, I had the ultimate privilege of attending my second CMC Rocks the Hunter country music festival. Because of education engagements on Friday and work responsibilities on Sunday, I was only able to attend the three-day music festival on Saturday. That was completely fine by me. Why? Because my idols, Love and Theft, were performing on Saturday. Sure, country music greats like Gretchen Wilson were performing on Saturday as well, but I was no where near as excited for her as I was for Love and Theft. 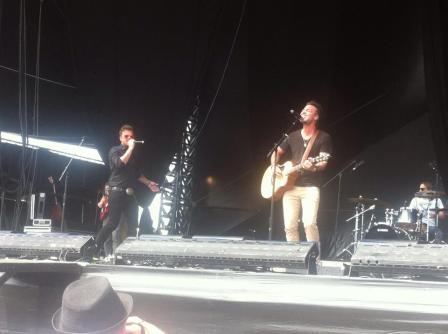 Stephen and Eric, in the flesh.

I can’t even remember when my fandom for Love and Theft even started. I just remember one moment I was Youtubing some of their stuff and listening to it, and the next, I had both of their albums (two copies of one) and a custom Love and Theft iPhone case. My friends can tell you that they are tired of seeing me gram pictures of Eric and Stephen (the men who comprise this awesome musical duo) instead of actual Instagram things, like pictures of what I had to eat that day, or awkward full length mirror selfies of my OOTD.

Love and Theft were scheduled to perform at last year’s CMC Rocks the Hunter, but due to circumstances – Eric’s gorgeous son Camden William Gunderson came a bit early – they were unable to play. I had bought them presents to give to them at the festival so this was a big blow to me. However, when you’re a Thefthead, where there’s a will, there’s a way. I posted to every LNT social media outlet I could until I found out their PO box, so I shipped their presents to them with a handwritten letter with one small request to let me know that they got their presents. What I got in return, however, was a picture of them with their gifts, holding my letter, and an e-mail saying that my package had made their day. When I saw this, I kid you not – I was running around the house, screaming and saying “OH MY GOD, NO THEY DIDN’T! OH MY GOD NO THEY DID NOT!” 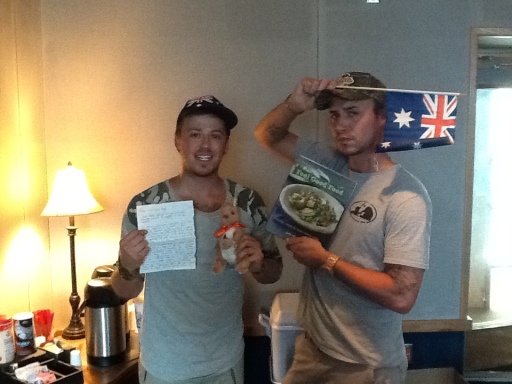 The picture they sent me, with my letter in Stephen’s hand.

So, in 2014, this was my first time seeing them perform ever. Ever. I mean, like, ever. Needless to say, I was acting like a scared chook running for its life. With an extremely high pitched voice.

My best friend and I rocked up about a hour and a half before the boys were to perform. Why? Because I wanted to get a good spot at the front of the mosh and didn’t care how long I had to stand there for it. Fortunately for me, we got good spots at the front. The sun was blazing and I was in painted on jeans and cowboy boots, but I didn’t care. What was actually two hours later, the boys graced us with their presence. I screamed. I jumped. I waved. I screamed some more. I jumped some more. 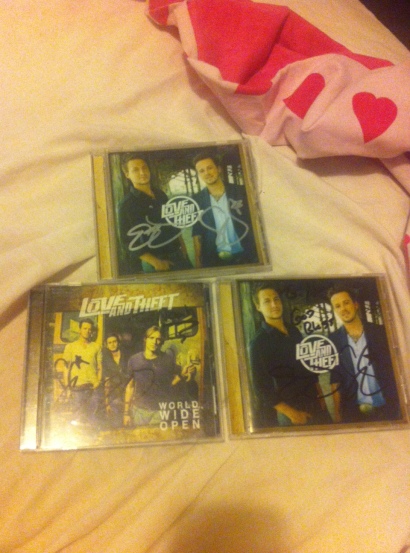 All bias aside, Love and Theft were amazing. SIMPLY AMAZING. They were everything I ever expected them to be PLUS more. They sung several of their hit songs, a couple of covers, and interesting “duet” of sorts with Blackjack Billy, and Stephen even busted out a few Eminem lyrics to Lose Yourself – the latter of which can be found at this link. Excuse the shaking. I was a bit excited.

As I am familiar with how CMC Rocks works, I knew that right after their performance, they would be heading up to the CD tent to do a meet-and-greet and autograph signing. As soon as they had finished their set – which included running up and down past the gate slapping hands with the fans (me included, which provoked a “OMG I TOUCHED THEIR HANDS” comment) – my BFFL and I literally sprinted up the hill to the CD tent. We were still very far back in the line but it doesn’t matter. I was going to meet my idols for the very first time! Like last year, I bought Eric and Stephen a bag of presents. The catch? I left it in the car. In painted on jeans and cowboy boots, I sprinted to my car to pick up their presents and rush back to the line, and after all that cardio, we hadn’t moved in the line. It’ll be worth it, I thought to myself positively.

Two hours (LITERALLY) later in the line and I was at the front. CMC officials were coming around selling copies of their self-titled albums because they would only take a picture with you if you had official merch to sign, and I proudly boasted my three Love and Theft CDs from home. Bitches came prepared. I was at the front of the line. It was my turn. I literally felt as if I had to throw up because I was that excited. They turned around. I put on my best genuine smile and said “I bought presents for you guys.” Both Eric and Stephen responded with genuine gratitude and Stephen even hugged me. YES. STEPHEN BARKER LILES HUGGED ME. Stephen asked me what I bought them and I spat out a nervous rant on “how I didn’t want them to open it in front of me in case they didn’t like it and I saw their reactions and died.” Eric offered me a more reserved handshake and thanked me. Because of this, Stephen wanted to personalise my autographs for me so he asked my name. I replied with “Noah” whilst trying to remember how to stand up. I took my photo with them. Eric shook my hand again and both me thanked me for my gifts. We walked off so the people behind us could get their turn. 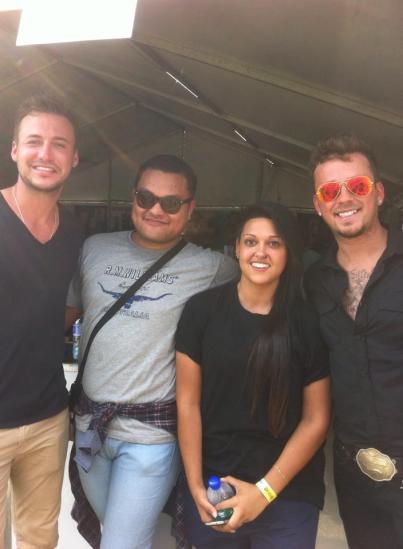 Serious contender for best day of my life.

In what was originally supposed to be a short memoir of sorts, has turned into a 1000+ word spiel. I don’t know, I guess it’s what happens when you are an ultimate fan. Or in my case, the no#1 Thefthead in Australia (and the world!)

Oh, and did I mention Eric commented on my Instagram picture thanking me for the gifts? You can only imagine my screaming reply.