I will happily admit that I am definitely not the person. Not because of my gender either. 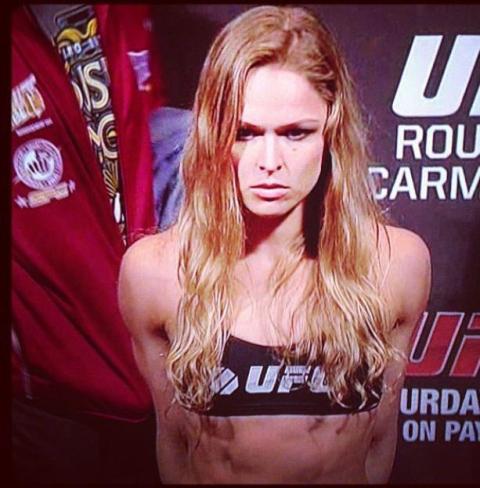 There’s a lot to be said about a woman who looks this good and can beat you up with her eyes closed. (SOURCE: Ronda Rousey’s Facebook)

Current UFC Women’s Bantamweight champion and total all-around badass Ronda Rousey is undefeated in pro MMA bouts for a reason. If she hasn’t got her opponent down on the floor in a tightly sinched armbar to make them submit, she’s punching them fair in the face and then laying into them to knock them out.

A few of Ronda Rousey’s accolades include:
[x] First and current UFC Women’s Bantamweight champion
[x] Therefore making her the first UFC Women’s champion ever
[x] Undefeated professional record of 10-0-0
[x] Blockbuster star in The Expendables 3 alongside Sly Stallone, Jason Statham and Dolph Lundgren, just to name a few
[x] Multiple awards in 2013 for “Female Fighter of the Year” from different organizations
[x] The first woman to score a medal in Olympic judo for United States of America

In a similar fashion, Ronda Rousey’s victims include:
[x] Alexis Davis, an impressive fighter who was knocked out by Rousey in 16 seconds
[x] Miesha Tate, Rousey’s well documented rival who has fallen to her twice via armbar submission (but was the first woman to take her past the first round, so kudos to her.)
[x] Sara McMann, whose first loss was at the hands of Rousey
[x] Liz Carmouche, who nearly took Rousey to the second round but just fell short

I could go on and on listing what Rousey’s done in her career and who she’s beaten but the fact is simple: Ronda Rousey is outstanding.

And it seems as if she’s running out of competition…

If recent reports were to be believed, that might not be the case for much longer.

Solstice Satisfaction has decided to choose a few women who might have a shot of taking the UFC Women’s Bantamweight Championship off the woman who seems mighty freaking unstoppable:

Gina Carano
The one female MMA fighter who has made as big a name for herself as Ronda Rousey is none other than Gina Carano. As beautiful as she is deadly, the recent reports alluded to previously have suggested that Garano might make her presence known in UFC if Dana White can strike a deal with her. It’s been rumoured that if she is signed, she would shoot past all the UFC women’s bantamweight contenders and challenge Rousey for the title. The two biggest names in female MMA? Hell yes!

Cristiane “Cyborg” Justino
The only woman to have defeated Gina Carano in professional MMA is the Cyborg, a name aptly given to the woman for her freakish strength and freakish, like, everything. Marred by controversy for having a win reversed into a no decision for testing positive to an anabolic steroid, the Cyborg might be the woman who could take Rousey to her limits.

Cat Zingano
Also currently undefeated in professional MMA fights, Zingano is one of the best pound-for-pound female fighters in the world. The no#1 ranked pound-for-pound female fighter in the world? Ronda Rousey. She was the first woman to win a “Fight of the Night” award (along with Miesha Tate) and was also victorious in said fight, so that’s saying something. It would be interesting to see both Zingano and Rousey put their undefeated streaks on the line to fight each other.

Well, until Rousey is defeated – and I personally hope that takes a while because I may or may not have the biggest idol crush on Rousey – it looks as if the Rowdy one is going to take full charge of women in MMA.

Unless the new strawweights have anything to say about it.