The film, not the classic Grand Theft Auto game. Sorry.

If you made the same mistake as me (like referenced above) where you thought the upcoming film titled San Andreas was going to be a live-action Grand Theft Auto film, then you were sadly mistaken. Instead, we were graced with an action-packed disaster film starring Dwayne “The Rock” Johnson, Carla Gugino, and that handsome bloke who played Jamie on Home And Away.

Not at all related to a certain video game series, this movie follows the events of a disastrous earthquake of monstrous proportions and the damage it causes to the west of USA. Like any other action movie, of course, there is a big hulking ironman out to rescue his family… and there’s a Kylie Minogue cameo in there as well. 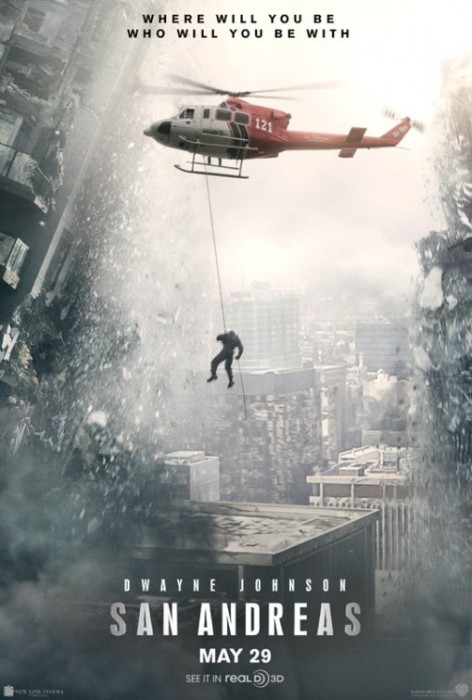 No gang colours in sight. Tear.

I’m not too big a fan of disaster movies, and here’s why: they all follow a very similar formula, and instead of straying from it to make it fresh and unique, this film stuck to it. And it even included some of the cringeworthy clichés I really hoped they wouldn’t… but more on that later.

The plot was very basic in my sweet and humble opinion. There was a natural disaster of drastic proportions happening, and people were dying left, right and centre. Their seemingly normal and trivial lives were suddenly interrupted by this giant earthquake (and subsequent tsunami) and they had to rely on their basic survival instincts to… survive. Sounds simple, right? That’s because it was.

As I mentioned before, this movie relied on typical clichés that suit the disaster genre: a big bulking hero who has some kind of typically macho job, a seemingly clueless female lead who turns out to be more resourceful than you would expect, a near death (I won’t say who…) but they’re suddenly revived, and they even finish the movie with that line… “So… what now?” Like, come on. Oh, and the heartbroken parents are looking for their daughter. Very unoriginal.

Dwane’s acting, God bless his giant soul, leaves a little to be desired. I don’t find him to be believable, and that’s in “his” role (that being an action hero). Let’s also talk about the giant elephant of the casting as well: The Rock and Carla Gugino’s daughters looked absolutely nothing like him, but resembled Gugino. Clearly, he was not the biological father… or maybe Hollywood just need to invest in young Polynesian actors and actresses.

What I will say, however, is that Carla Gugino was fantastic in her role, as was Hugo Johnstone-Burt; if you didn’t know he played Jamie on Home and Away, then you really would’ve thought he was a British gentleman travelling at the wrong time. Gugino is timeless, and in fact, gets more beautiful with age; on top of that, her role as the panicky ex-wife was spot on, and I apllaud her. Alexandra Daddario was okay in her role, I guess; she’s so perfect looking that I was kind of distracted, to be honest.

The action/disaster scenes in the film were very believable, and it made me question my American holiday in October. (AUTHOR’S NOTE: this natural disaster affected like every city I’m going to, but you know, whatever). I really felt as if all of this was happening, and until my friend told me this was filmed in Australia, I wouldn’t have been any wiser and would’ve genuinely believed this happened in the actual destination. I guess Jamie from Home and Away should’ve been a dead giveaway of the filming location, but whatever.

I wouldn’t recommend going out of your way to see this one, but if you have time to kill and want something fast-paced and action-packed, then San Andreas would be a good fit for you.