A book I picked up willy nilly in a cheap bookstore turned out to be one of the most confronting pieces of literature I have ever read.

I present to you: Cartel by Lili St. Germain, the first in a series of novels that isn’t for the faint-hearted. It is important that I note that this is first novel of St. Germain’s that I have read, and I have not delved into the Gypsy Brother series yet.

Cartel is a dark romance novel that follows a young 19-year-old Colombian girl Mariana Rodriguez who, despite having big plans for herself, is the daughter of a selfish drug lord. After her father loses an expensive shipment of cocaine, Mariana offers herself to his boss as payment for the lost drugs, and Mariana’s life changes dramatically. She expects the worst – forced prostitution, drug trafficking, even death – but what she doesn’t expect is to fall in love with the wrong guy, Dornan Ross. 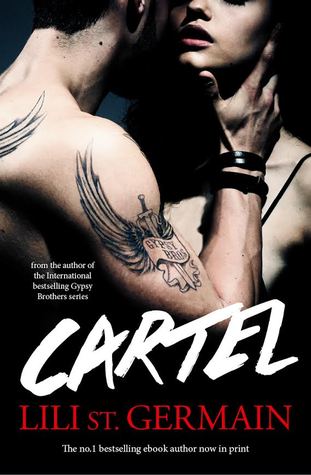 This dark cover reflects the contents of the book. Be warned

I like to consider myself as pretty open-minded; you can tell me any extraordinary or odd thing you have done, and I won’t bat an eyelid or judge you. This book, however, was really confronting and I found myself quite scared of the darkness contained in this book. I had even ,contemplated putting it down and not finishing it because of its contents, but alas, I finished it. St. Germain did her research into the world of drug dealing, drug lords and everything drug related, because this novel unfolded as if it was happening right in front of me.

The amount of sexual violence and just general physical violence in this novel made me cringe, not because of the detail in which it was described, but because I know that somewhere out there, this kind of thing is real, while I sit in my double bed in a modest suburban house in east Australia.

The character of Mariana was brave, strong-willed and fearless when it mattered most, but deep down she was afraid and true to her young age. It was because she was fabulously flawed that I really liked her. I liked how her internal, insecure thoughts juxtaposed her strong demeanour, and that in the face of death (literally), she wasn’t scared. While I acknowledge how the character of Dornan Ross could be book boyfriend worthy, the darkness and malice in him turned me off, as it should have. He has some inner demons that he needs to deal with and until he does so, the dark relationship between him and Mariana cannot have a happy ending, which is where this series is heading, I imagine.

St. Germain writes with such a gritty attention to detail that yes, I repeat, I was considering putting this book down. I read this book cover-to-cover in one day because I was so enthralled with the storyline and couldn’t wait to find out what happened next, how Mariana and Dornan’s relationship evolved, and whether or not she would survive until the end.

A compelling start to a promising book series, Cartel is a book that you should read, only if you have a strong stomach. I look forward to reading the rest of the series, along with other St. Germain novels.