I’m just kidding. You love me. You know what we’re up to.

So we left Keystone and Mount Rushmore behind, and we were on our way to Cody, Wyoming, which was our stop near Yellowstone National Park (not to be confused with Jellystone Park). On the way to Cody, we had a scenic tour through Bighorn National Forest, and we had a cute stop by a river. “Oh it’s just a short hike down,” they said, “you’ll enjoy it”, they said.

They lied. The hike down was terrible. The hike up was worse. No amount of beautiful creek streaming goodness was worth that hike. I will say no more on the matter. 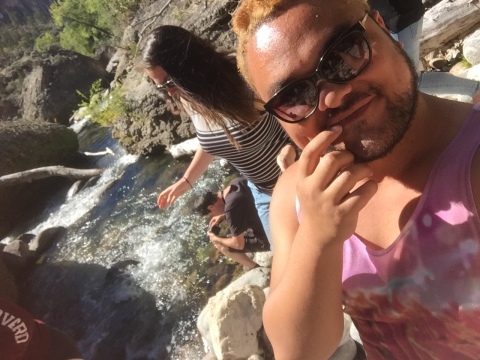 We reached our hotel in Cody, aptly named the Buffalo Bill Antler Inn. This hotel was quite charming in the fact that it had actual keys for the rooms. Like, the silver edgy key. What even.

Our first night had an included dinner of sorts, in that we were given $15 to spend on dinner, and given that most dinner options were more than $15, I didn’t understand. But yolo. The best part about this dinner place was that they had this kind of butcher’s paper for a tablecloth and encouraged us to graffiti it with crayons. My table, being the old children that we were, requested another tablecloth because we had filled ours quickly. Please enjoy my Picasso masterpiece below. 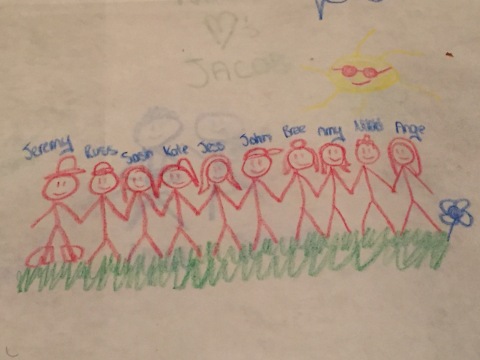 Having been drained all day from hiking down and up that stupid hill, Angela and I called it a night while everyone else went out. Apparently we didn’t even miss a good night, so whatevs. 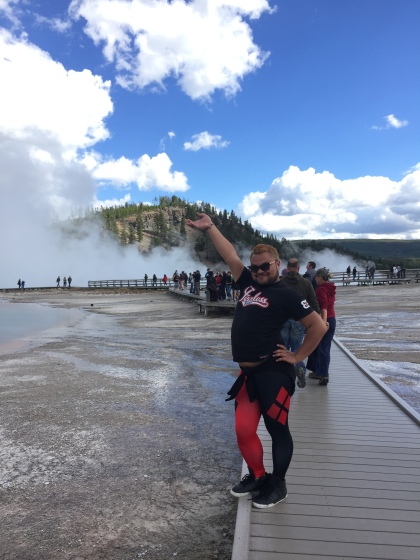 We spent all day at Yellowstone – ALL day – and did not see a bloody bear. My sister and I are obsessed with bears and I was dying to see one, but it wasn’t meant to be. I mean, not like I was going to shoot it with a sleeping dart, bring it back to Australia with me, and adopt it as my own child…

If you’re a hiker, I’m sure you’ll enjoy Yellowstone National Park. Alas, I’m not a hiker, and I prefer the physical exercise of shopping, so I can’t honestly say I particularly enjoyed it. Also, the smell of sulphur that seemed to be on every possible hike you could do in Yellowstone National Park didn’t help either. I did manage to snap this really cute picture of me by the canyon though. 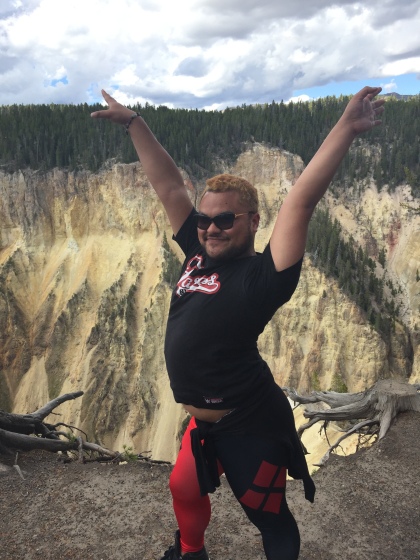 The second night in Cody was also quite uneventful. We had dinner at a cute Italian restaurant that had a whopping size cheese pizza that even I, the infamous cheese pizza eating machine, could not finish; then we trotted on over to the laundromat to do our washing. Full of excitement, right?

Bags were to the coach at 7:45am as per usual and we were off to our next stop: Jackson (Hole), Wyoming. On the way to Jackson, we were blessed with probably the most beautiful view I have ever seen. The Teton Mountains (which is some other language for titties. There’s your fact for the day) provided us with postcard that-can’t-be-real views, and I snapped this really cute picture of myself in front of it. 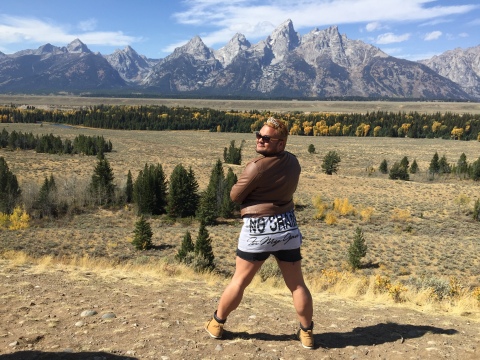 Jackson was probably one of my favourite stops due to the optional here (that pretty much everyone did): the Teton Trail Ride and Cookout. Basically, we were going on a horseback trail ride and getting fed “typical cookout” food. I had never ridden a horse before, so I was instructed not to wear the above outfit to sit on a horse, and it was recommended that I wear long pants. All my long pants were either A) dirty and needing to be washed or B) MIA, so I rode a horse in white jeans. And a Harley Quinn top. 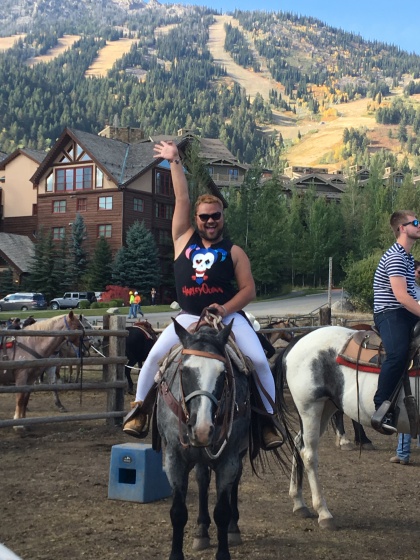 This was my favourite optional by far. My horse – his name was Kopenhagen and he was beautiful and he loved me – took me through this beautiful scenic trail (which got a bit narrow at times but yolo), and by the time Kopenhagen and I had to be separated, I began crying. #Kopenhagenikki 5eva.

The cookout dinner afterwards did the job, and we were also given a free beer for our troubles. Wait… scratch that… Ben was given my free beer for our troubles. After our cookout dinner, we were taken back to the ranch/farm/whatever you call it, and we were taught how to play some “traditional farm games”, like throwing an axe into a piece of wood, and properly using a lasso to rope up a fake bull made out of some metal. Because I’m iconic af, I managed to get the wrong end of the axe into the wood… oops. 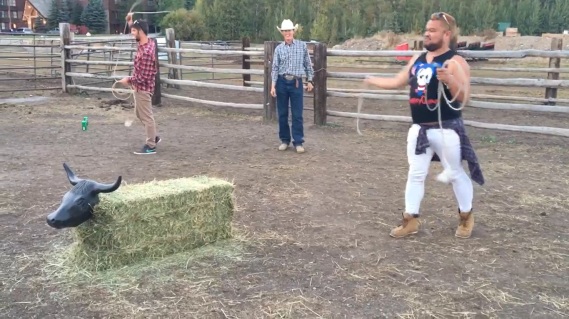 That night, my favourite underagers weren’t allowed into the bar, so I went with them back to the hotel and we opted to watch Sully at the movie theater across the road. Because I love Tom Hanks. Purse so heavy, gettin’ Oprah dollars.

The following day, we were off to Park City, Utah, which also included the obligatory “This is Mormon state, lemme tell you about dem Mormons” speech. We arrived to Park City in the evo (looks @ Genevieve Schwartz) with free time on our hands, so of course being the greatest f’in Grand Northern Contiki group ever, we opted to have a pool party – and we definitely did not have room parties along the way either. Nods head.

If you’re looking to do a Grand Northern, let me just mention that the hotel in Park City – should it not be changed between now and whenever you do it – is probably one of the nicer hotels on the tour. Enjoy it while you can.

Also, I had dinner at Denny’s. I fucking stan Denny’s so much.

After a quick but ovely stop at Park City, we were on our way to Kanab, Utah, which was the stop that was central to a couple of the national parks we would visit. Kanab, which is a very small town that didn’t have neither a club nor a bar, would actually be one of the most eventful stops of the trip… but more on that later.

On the way to Park City, we stopped by Bryce Canyon National Park. I’m sure it was beautiful. By that, I mean I didn’t actually see the canyon or the view of the canyon, because it was so damn foggy there that I could barely see what was in front of me. 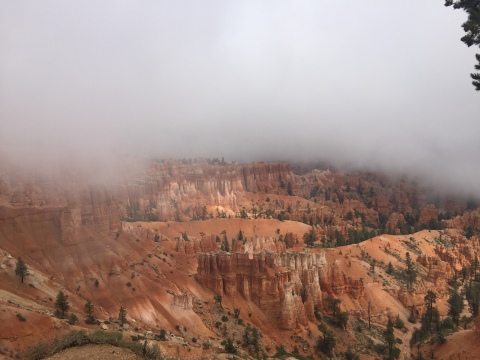 I was also lowkey worried that someone would fall down the canyon, survive the fall, resort to cannibalism, turn into a wendigo, and then I would be dragged by said wendigo while standing outside in my underwear yelling at my friends. If you didn’t understand any of that, I suggest you go out and play Until Dawn on PlayStation 4…

Oh. And look at this cute picture of me at Bryce Canyon. 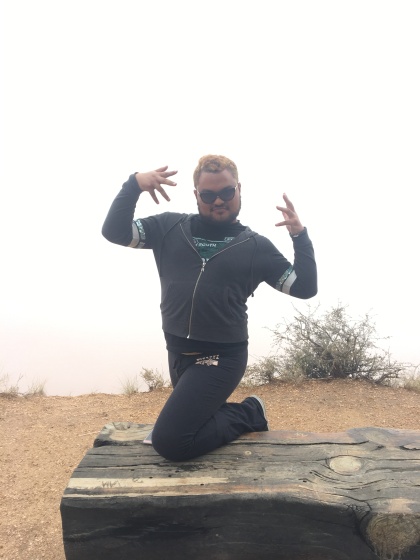 Our included dinner in Kanab was a cute kind of buffet style dinner, which didn’t offer much for me the vegetarian or Veegz the vegan. So they compensated for our loss with a single veggie pattie… not on a burger or anything, just a single veggie pattie. I appreciate the sentiment, I really do.

With absolutely nothing to do in Kanab at night time, the crew and I had some super ultra mega room parties – I mean, no we didn’t – and got to bond a bit more with the other Contikians on our trip. Over alcohol. Lots of it.

The next day, we were off to the Grand Canyon! Now, I won’t mention how, on the coach, I was irritated to the point of mental breakdown because a certain someone wouldn’t shut up and sounded like a broken damn record… but the short ride to the Canyon was tainted.

Having been to the south rim before, I kind of knew what I was in for, but I was still blown away by the beautiful views that nature had created here. Like, check out this beautiful view I had of the Canyon simply sitting on a deck chair.

A few of us – Kate, Russell, Ange, Bree, Sasha, Jacko, Big Red and I – went exploring along the rim of the Canyon and took some awesome pictures along the way. Some of them decided to risk their damn lives for a few likes on Insty (looks @ Russell, Sasha and Jacko) but all-in-all, it was probably one of my favourite moments of the entire tour. 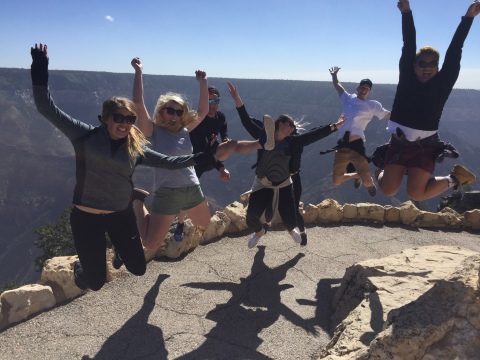 We were treated with a pretty darn good lunch at the Canyon restaurant or whatever you want to call it, and soon we were back on the road back to Kanab.

This following scene is probably one of my most favourite moments of the entire tour. Philip in all of his handsome Bostonian glory planned a picnic slash sports day fun bonanza for us in a really beautiful park in Kanab, and Hayley and Mish decided to make it a dress-up picnic slash sports day fun bonanza. While most of us weren’t prepared for costuming, I pulled out my regular every day wardrobe and dressed up as Nikki Bella. You’re welcome. 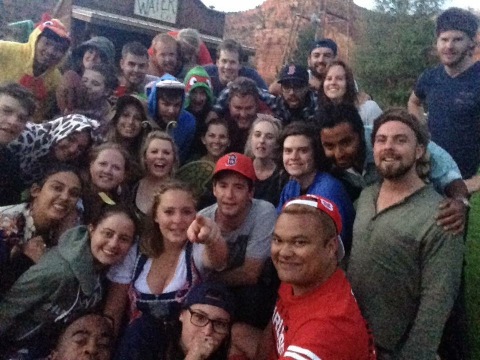 The evening had lots of food, drinks, laughter and fun, with the high point being a game of American football pitting Team Philip against Team Nikki. Under the wise tutelage of me, my team took the victory, undoubtedly because of my stellar defence skills. Just ask Hayden. 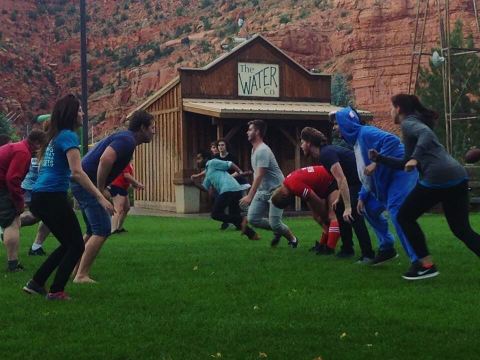 After probably the most fun involving me playing sport ever, we went back to the hotel. Now this is where things got messy. How did they get messy, you ask? With an old fashioned intimate nightly gathering, of course. 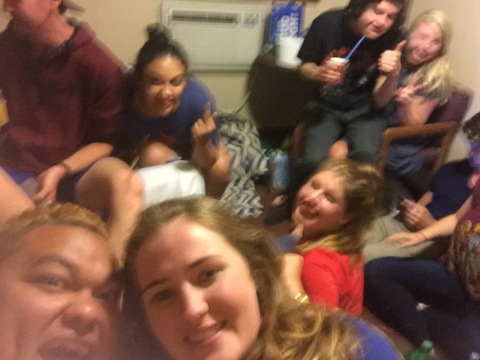 Drinks were flowing, beats were playing, bodies were swaying… and then chaos. Okay, so I can’t actually tell you what happened, but just picture me rolling around on the floor, screaming “things” while poor Kienan is trying to calm me down on the phone, and JJ is there trying to explain to Kienan why I am chucking a corridor tantrum in Kanab. And that’s not even the bulk of it.

Rule number one of this tour: we do not speak of Kanab.

Saved by the bell. This is where this portion of the travel blog ends. We have two more cities to go on this wonderful journey of mine, but being two of the biggest and most talked about US cities ever, you’ll understand why two cities needs its own post.