I only just realised that I hadn’t written about my first cruise ever. Tl;dr – it was amazing.

Along with going on an amazing six-week holiday with Miss Kate, I had another holiday to go on only a few months later. Daddy wanted all of my family to get together and go on a family holiday – our last official family holiday was in 2011 – so not only was it going to be a great bonding experience for everyone, but it was going to be my first time going on a cruise.

On February 14, my family and I boarded Royal Caribbean’s Explorer of the Seas, ready to spend the next eight nights on board. Not only was my immediately family attending – myself, my two parents, two brothers, two sisters, two sister-in-laws, a niece and a nephew – but we also had extended family and other friends with us, so in total, there were about 30 of us on board.

Instead of going through my days in chronological order and listing what I did daily, I’m just going to tell you everything I had done on the cruise in general.

First of all, it’s important to mention for anyone with a beating heart that food is free (with the exception of some specialty restaurants, but honestly, why would you pay to eat when almost everything else is free)! The only time I ever paid to eat was when I ate at Johnny Rocket’s, which was only a $7USD surcharge fee, and then everything on the menu was yours for the taking. 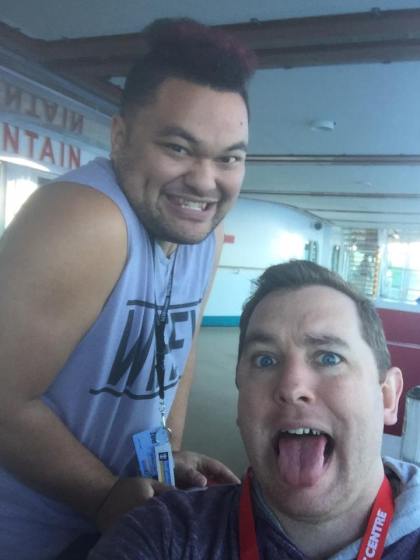 Each morning, I would go to the Windjammer Marketplace for breakfast, which is the Explorer’s version of a buffet. I can’t tell you about the variety of foods they had there for your first meal of the day, because I only ever ate hash browns and croissants; if I was feeling a bit adventurous, I’d chuck a tub of yoghurt on there as well.

While everyone in my family were free to do whatever they wanted during the day and night, we always got together at 6pm in the Sapphire Dining Room for family dinner. this was the Explorer’s version of fine dining. I’m not a fan of fine dining, really; I prefer a burger and fries over some overpriced salad that takes up a quarter of the plate. But God damn, the Sapphire Dining Room was outstanding! The food was great – and there was always one or more choices for vegetarians – but what made this dining experience really great was the service. My family had the absolute pleasure of dining with our waiters Ikomang and Imade, two lovely gentlemen from Indonesia who spared no expense in making sure our time with them was always 11/10.

The types of activities on board cater to everyone also: there is trivia and gallery viewings for the more introverted; there is ice skating and rock climbing for the physically adventurous; and there’s karaoke and outrageous game shows for the attention hogging types (me). I can’t even begin to describe the amount of fun I had on board, from playing putt putt with my nephew and niece, to playing as Novak Djokovic on Virtua Tennis in the arcade, the Explorer of the Seas had almost limitless amounts of activities to do. There were also different shows available, with ice-skating extravaganzas taking place on the ice skating rink, and broadway style shows in the Palace Theater. And if you were confused as to what you wanted to do that day, they gave out day sheets for everything that would be running that day.

I can’t speak for the other types of rooms available on board, but my two sisters and I shared a room with a balcony – because we can’t not have fresh air in our room. How gross. The room was pretty small, and the bathroom and shower left no room for me to effectively shave my legs, but when you consider the amount of time you would actually be spending in the room as opposed to everywhere else on the ship, then it was worth it. My sisters had the double bed whereas I had a hidden bunk bed that appeared from the ceiling. Great use of space, Royal Caribbean!

The island visits were also amazing! On my cruise, we were able to visit two countries and three islands: Nouméa, New Caledonia; Mystery Island, Vanuatu; and Maré, New Caledonia. Nouméa was beautiful in its own different way; it wasn’t what I expected it to be, but then five minutes down the street, it was… if that makes sense. My siblings all had ice cream from this place – which they said they had imported from France – and said it was the best dessert they’ve ever had, so there’s that? (I opted not to buy anything because why would you when the food on the ship is free). Mystery Island was actually paradise: the ocean was crystal clear and had this amazing shade of azure blue that it looked like I was staring at a postcard; the natives who visit the island to greet tourists were so adorable and friendly and had several goods and services for sale; and the sun was beaming down on the island as if we were the only place on earth. Admittedly, I didn’t get off at Maré, because I was too damn burnt from Mystery Island and everything hurt everywhere.

And finally, if you have read this far, there is the nightlife on board (yes there is nightlife on a cruise). Depending on which drink package you get – if you even choose to get one at all – then drinks on board can either be pricey, or already paid for.  The alcoholic drink package, which is around $45USD a day, guarantees virtually unlimited alcohol for the entire duration of your cruise. I suggest that if you’re a big drinker, or even if you can go through at least five cocktails a day, then this package is for you. The Explorer had several options for you if you were nocturnal or just liked a good night out – there was the casino (don’t ask me about it, I have no idea how to gamble other than playing Blackjack terribly), the Star Lounge (which was like a fancy music-playing bar) and Dizzy’s (the nightclub). Having experienced the latter two, I can say that the nightlife on the cruise was pretty damn good. And when Dizzy’s shut, you were free to head to the pool deck where the drinks would continue until the early morning.

The people you meet on board are pretty amazing as well, and if you’re lucky like me, you’ll take some friends away from your short trip. Everyone… meet my new little brother Alex.

Oh, and there was also a gym on board.

If you’re interested in doing a cruise – or you’ve done one with another company – I highly recommend cruising with Royal Caribbean. It was a pleasant 10/10 experience for everyone in my family, and I am more than excited to do another one with them.