It’s the NRL Grand Final. Your team is up by 14 points. There’s only 10 minutes to go. Just as your team spirit is running high, someone behind you spills their beer on your hair and attempts to start a fight with you.

Game over. Your high is ruined. 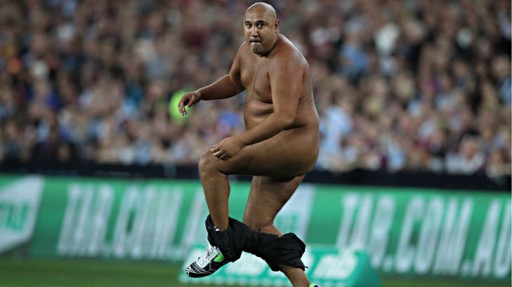 For any sports fanatic, the atmosphere of a big league game mainly depends on your experience as a crowd spectator. If everyone is cheering and generally having a good time, there is a positive vibe floating around the audience setting a good mood amongst those in attendance.

There are times, however, when a select few people have too much fun, get a bit rowdy and ruin the atmosphere by causing disturbances and alcohol-fuelled brawls. The issues that affected the etiquette at league games range from people unlawfully accessing the field of play to throwing projectiles at the field and fighting amongst themselves.

South Sydney Rabbitohs fan and league enthusiast, 21-year-old Lara McKenzie, recalls an instance of aggression at a league game that extended to her 1-year-old son.

“Two drunken fans of the opposing team were cursing and such,” she said, “(they) were calling me a bad mother for dressing my son in Rabbitoh’s colours.”

Although incidents such as the streaker at the State of Origin 2013 decider do happen, which involved a naked man accessing the field in the last minutes of the game which halted a try and greatly interrupted play, the Security Manager for the Sydney Cricket Ground and Sports Ground Trust John O’grady said the crowd behaviour at Allianz Stadium has been good as of late.

“Our eviction rates for any particular offenders have been pretty low… might average 2 per match.

“We have zero tolerance for any offences committed in the venues.”

O’grady continued to say that most of these offences are generally alcohol related, whether that be from high intoxication or from unlawfully bringing alcohol in to the premises.

Compared to the crowd’s behaviour around 5 years ago, however, the etiquette at Allianz Stadium has improved according to O’grady and his staff.

“The evidence that I get from my (junior) supervisors (suggests) the crowd behaviour has essentially gotten much better,” he said.

If there were a scuffle between two or three people, it would be quite easy to ignore it and continue watching the game. However, if the scuffle involved a majority of the section, the same could not be said. These all-out melees are rare with the stricter enforcement placed in today’s society and at Allianz Stadium, O’grady says that he hasn’t encountered a situation that was out of control.

“You may have a brawl that involves 3 or 4 people but not something that occupies a whole bay. Any issue that escalates that’s probably a little bit beyond security level… police take over.

“In general terms, major incidents that cause any levels of consternation is pretty low.”

Here are a few tips on how to properly behave at an NRL game – or any sports match for that matter:
[x] You have the right to cheer as loud as you want for your team just as much as everyone else does. Starting a fight with someone just because they support the other team is petty and stupid.
[x] It’s Australian to sling back a beer or two at a footy game with a pie and chips. Just don’t drink too much that you have to be wheeled out by security.
[x] Don’t throw crap onto the field or insult/yell at the players. It’s really disrespectful to the game that you should love if you’re in attendance.
[x] Don’t streak, for god’s sake. My poor Matty Scott deserved that try.
[x] Lastly, do not wear cocktail dresses and hooker heels to footy games. You will look stupid.

It’s always important not to forget that there are people in the audience that want to watch a good game of rugby league being played. So remember: drink responsibly and keep any unnecessary comments to yourself that might incite hatred or violence.

Stay safe and go the Brisbane Broncos for 2014!