Someone had to say it.

One of the greatest talking points about WWE currently has been Asuka’s undefeated streak. Ever since she debuted in NXT back in mid-late 2015, Asuka has won every match thrown her way, and has defeated very formidable opponents like Sasha Banks, Bayley, Nia Jax, and Eva Marie. That’s right. I said it. Eva Marie was a formidable opponent, but more on that later.

A Goldberg-like run through the women’s division should be a breath of fresh air, right?

Well it isn’t. I’ll repeat myself: Asuka’s undefeated streak has ruined not only the WWE women’s division, but the entire women’s revolution in general. 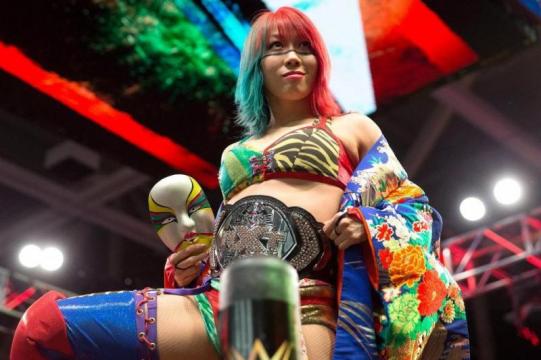 If you want to compare Goldberg’s streak to Asuka’s, the main difference is that Goldberg had a lot of other male superstars to go through, so fresh new match-ups could be made on the reg, and it didn’t really feel like his dominance was becoming outdated or boring. On the other hand, the WWE women’s division – taking into consideration both Raw and Smackdown Live – has around 20 active superstars, give or take. That doesn’t leave Asuka with much variety of matches. Her run on Raw has been lacklustre as she has cleaned through every woman on the division, and has had several match repetitions which should’ve been heralded, but had the opposite effect, against the likes of Nia Jax and Alexa Bliss. Granted, her move to Smackdown will lead her to new match-ups, but it’ll be the same thing, and shortly after, it will become stale again.

In regards to the booking of it, at first it was cool, thinking “Ooohhh I wonder if this chick is finally going to beat Asuka’s streak” kept the matches interesting; now, it’s just boring and predictable, and that predictability has ruined the WWE product. Every time you see Asuka come out for a match, whether it be a singles, tag-team or even a Bra and Panties gauntlet match, you just groan because you know that Asuka’s going to win, regardless of whom she is facing, or if she’s squashed by a piano falling from the sky. Take the Mixed Match Challenge for example: this fun and interactive form of wrestling that has made dream mixed teams like Braun Strowman and Alexa Bliss, or Finn Balor and Sasha Banks, has now basically become a laughing stock, as you know that all these teams will be fed to the Miz and Asuka, and then eventually, the Miz and Asuka will win the entire thing, solely because Asuka is on the team, and if she is going to have her streak broken, it won’t be on the Mixed Match Challenge.

I respect Asuka as a wrestler and a performer, but she isn’t my favourite. And you think that would play into my disliking of her booking, but it actually isn’t. If you know me well enough, you know that I identify a lot with the pretty model-esque girls of wrestling, like Sable, Stacy Keibler, Eva Marie, and currently, Mandy Rose. But do I want to see Mandy Rose bulldoze through the competition and go nearly three whole damn years undefeated? Hell no. And you can say “That’s because Mandy Rose isn’t a believable threat to the other women”; while that may or may not be true depending on your opinion, why the hell hasn’t Nia Jax gone nearly three whole years undefeated? She is a way more credible threat to the other female superstars. Additionally, using Nia as an example, she has been solidly booked since her main roster debut – give or take a few questionable decisions (like that strange storyline she had with Enzo Amore) – and she has taken clean losses, but her dominance has remained the same. If Jax can be booked to lose but still keep her momentum, then the same could’ve worked for Asuka.

If WWE want to add a much needed breath of fresh air to their women’s division, they need to let Asuka lose to Charlotte Flair at WrestleMania. What better place to lose your first match in WWE than on the grandest stage of them all, and against a name like Charlotte Flair. If Asuka goes on to win the Smackdown Women’s Championship, and then successfully defends it time and time again in predictable matches, then I will have no choice but to bash my own head with a brick.

If Asuka doesn’t lose to Charlotte at ‘Mania, then at least have Carmella come in and cash in on her and beat her. Done. I would be happy with that.

Now back to Eva Marie. While Asuka hasn’t technically lost a match in WWE, let me just take you on a history lesson back to the NXT women’s battle royal to determine a #1 contender at the beginning of January 2016. Asuka eliminated Billie Kay and Peyton Royce and appeared to be the last woman standing… but then Eva Marie ran in and eliminated her.

Eva Marie is ready for Asuka!

So, as of writing, the person to come the closest to actually defeating Asuka… is the Red Queen, Eva Marie.