It’s my favourite time of the year! Even moreso than my birthday, Christmas, and the one night a girl gets to dress like a total slut and no one can say anything about it.

Introducing Wrestlemania 31, the first Wrestlemania pay-per-view I’ll get to watch on my WWE Network account (which you can get for just $9.99) and roughly my 13th Wrestlemania I’ve ordered and watched live. Aptly named the greatest spectacle of sports entertainment in the world, this year will see the WWE debut of legend Sting, the first championship bout for the ever-controversial Roman Reigns, and the Wrestlemania debut for the greatest thing to happen to women’s wrestling in years, Paige. 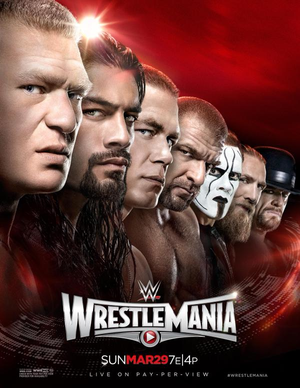 But seriously, why is Nikki Bella’s face not on this poster?

In no particular order, here are my predictions for each of the matches:

Pre-show
Fatal 4-Way Tag Team Title Match
Tyson Kidd and Cesaro (C) (w/ Natalya) vs. The Usos (w/ Naomi) vs. Big E and Kofi Kingston (w/ Xavier Woods) vs. Los Matadores (w/ El Torito)
Winner: Tyson Kidd and Cesaro retain
I think this one’s a given. Kidd and Cesaro are the most technically sound tag team in recent years and all the momentum is going their way. Plus, I don’t see them dropping the titles soon. I’m going for a Natalya interference for the sneaky victory.

Andre the Giant Memorial Battle Royal
AKA the match used as an excuse to make sure every superstar is on the card
Winner: Damien Mizdow… or Sandow, whatever he’s using
The stunt double gimmick has worked wonders for Sandow’s career and he’s made it into his thing. I see Sandow and The Miz as the last two in the ring and Miz ordering Sandow out, but Sandow swerves and eliminates him to a huge ovation from the crowd.

Main Card
Singles Match
Randy Orton vs. Seth Rollins (w/ J&J Security)
Winner: Randy Orton
As much as I want Seth Rollins to win, I don’t see that happening. Randy Orton has come back with a vengeance and it’d make all the sense in the world for him to get his revenge by beating The Architect on the grandest stage of them all. Expect some backfired J&J Security interference.

7-man Ladder Match for the Intercontinental Championship
Bad News Barrett (C) vs. Dean Ambrose vs. Dolph Ziggler vs. Daniel Bryan vs. R-Truth vs. Stardust vs. Luke Harper
Winner: Daniel Bryan
So the man who turned last year’s Wrestlemania into HIS show has been “demoted” to an Intercontinental title match, but even still, I see Bryan winning this one. I mean, people can’t get enough of his Cinderella-ness and, well, I love him.

Divalicious Tag Team Match
The Bella Twins vs. Paige and AJ Lee
Winner: Paige and AJ Lee
There’s no secret that the Bellas are the backstage darlings of the WWE, and the face of the Divas division, but the outcasts sometimes known as PaiJ are the babyfaces and will come out victorious in this one. If recent reports of a changing Divas division are to be believed, expect a great match between the Fantastic Four.

Singles Match
Bray Wyatt vs. The Undertaker
Winner: The Undertaker
This one’s hard to call. I mean, I’m expecting an Undertaker win, but I wouldn’t be surprised if Undertaker lost to put over the “new face of fear” in Bray Wyatt. The streak’s already been broken so there’s no real breathtaking hype to this one. Undertaker to win via all his finishers… performed at least twice each.

Singles Match for the United States Championship
Rusev (C) w/ Lana vs. John Cena
Winner: John Cena
This one is too easy to call. Rusev’s never been pinned or submitted. John Cena is Superman. Superman will overcome the odds and be the first to pin Rusev or make him submit on the grandest stage of them all. I hope Lana’s there.

Singles Match
Sting vs. Triple H
Winner: Sting
Say what you want about Triple H, but he will put over a talent if he needs to (as made apparent against D Bryan), and expect him to do so again with Sting. Sting is an Icon (and I wish Cole would stop calling him the Vigilante), and in his first ever sanctioned WWE match, he’ll win. No question about it.

Singles Match for the World Heavyweight Championship
Brock Lesnar (C) w/ Paul Heyman vs. Roman Reigns
Winner: Brock Lesnar
If you asked me a week ago who I thought would take the win, I would’ve said Roman. Now that Brock has re-signed, I’m leaning more to the Lesnar side. I don’t think WWE are going to pul the trigger on Roman’s push right now, especially after the “lovely” reception he’s been getting from ignorant fans, so I expect a dominant Lesnar win here. SWERVE!! While Lesnar is down an out, Rollins cashes in and wins the World title. Brock takes a vacation and Rollins vs. Reigns is reborn!

Make sure you get work off, take the day off school or uni, or find a pub playing this event. You won’t wanna miss it!