Be prepared for my favourite season ever!

While season one was my introduction to this amazing game, season two managed to double the fun, double the drama, and just top what I thought was an un-toppable season.

The characters were more relatable, the season was almost twice as long, there was even more drama than #Cherrygate could dare dream of, and the avatar artwork was a whole lot better, meaning Tygress could be even cuter than before! 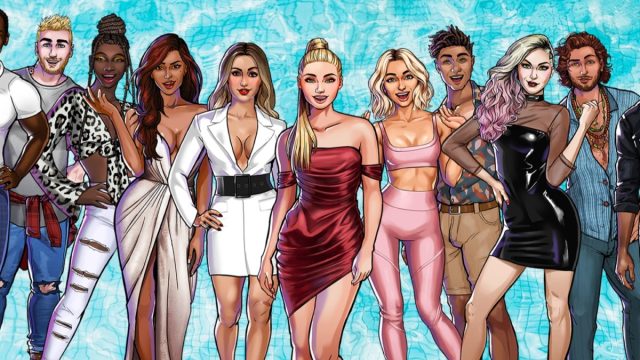 The beautiful characters of Love Island Game: Season Two (my Gary’s the cute blond one on the left… isn’t he adorable?!)

I have already played through this season twice and am now on my third playthrough (ended up with Gary first, ended up with Jakub second), and this doesn’t even include playing through the season for my #NikkiPlaysLoveIsland live streaming series. That should give you an idea of how awesome this season is.

But if I had questions about season one, then you best bet I have questions for season two.

SPOILERS AHEAD! YOU HAVE BEEN WARNED!

1. Why are we still playing as a fit female?
Come on Fusebox. Come on.

2. Why is Gary so perfect?
I have never experienced a love like the one that me and Gary shared… oh sorry, I meant that Tygress and Gary shared. To me, he was the most human of the characters, and coupled with his cheeky sense of humour and his bulging biceps, I was just completely enamoured with him. If I needed any more reason to love him, the story he shared about growing up as an insecure boy who became unhealthily obsessed with working out and had to seek therapy and help for his problem just made me fall in love with him even more… oh sorry, I meant made Tygress fall in love with him. In short, Gary Rennell is perfection, and I will not hear otherwise.

3. Why is Hope such a snivelling little bitch and why are we expected to put up with her shit?
I’m an avid participant of the Fusebox Games Reddit so I can share my feelings towards Love Island: The Game with other fanatics. A popular opinion among the group is that everybody hates Hope. There is no redeeming quality about her; if you choose to pair up with Noah at the beginning, she just snakes him off you with no regard for your feelings even after claiming she’s ‘in it for the girls’; she rubs her fake relationship with Noah in your face for the rest of the season; and she tries way too hard to be the unofficial leader of the girls to the point that you want to throw her overboard. Who died and made you Captain Sparrow, bitch.

5. What is the obsession with feet and farts?
Come on Fusebox, maybe one or two responses with feet/farts would’ve been funny, but when nearly every decision you get to make has an option to do with feet/farts… come on guys. Come on.

6. Why can’t you let me be a bitch in peace?
In my first playthrough, I was sweet and agreeable to ensure the best possible endgame. In my second playthrough, I was more true to myself, which meant that if I didn’t like the character, then I let them know it. Every opportunity I got to drag Hope, Lottie, Hannah and Priya (only in the beginning when she snaked my Gary off me), I took it, and it gave me such great pleasure when the sad emojis popped out. But even after all of this dragging, they were still trying to be friends with me and going on about ‘girls forever’. Ughhhh. Just fuck off Lottie. You’re not unique and loveable; you are a stupid ass bitch. Hate me and leave me in peace!

7. Why was this season so iconic?
It takes some great storytelling to make the player feel a sense of community among a group of video game characters, but Love Island: The Game Season Two managed to pull that off. From the invention of a new word to fool hunky Jakub (I always went with ‘al dente’), to the hilarious malfunctioning baby cry (waaah… ahh… aaah), every ‘personal joke’ made by the characters on the game made you feel like you were in on the joke as well. Making a player feel that sense of family and community even though it’s a video game is a rare occurrence, and Fusebox have done a wonderful job of making season two this enjoyable.

Now that that’s done, I’m going to get back to my third playthrough where I’m going to fall in love with Gary again and not give anyone else a chance even though I’ve already been down this road before. Sorry Lucas. You’re cute, but not Gary cute.