I’m sure this title is going to confuse most.

Remember back in the day when all of the 90s kids were in their teens and all the fads came along (if you need a reminder of these fads, allow me to redirect you to this). The people that know me the best know that I am particularly unfazed by anything that becomes “cool” in popular culture. When guys grew their fringes out and bought womens skinny jeans from Supre, I had a fro and wore pink t-shirts. When people decided to “drop it” to dubstep music, I took my clothes off to country.

In summary, I have never really been phased by phases.

In saying that, I am putty in certain people’s hands; by certain people, I mean admired celebrities. People think I have adapted my own sense of style and sass but what it really comes down to is how my highly-adored celebrities dressed and behaved. One of my most trademark things to wear is fur, most notably, fluffy leg warmers that you’d usually see at a rave. It wasn’t as if one day I woke up and decided it’d be cool to look like a walking polar bear. Instead, this trend that has turned my wardrobe into a PETA enthusiasts nightmare if the fur was real, was inspired by a seven minute wrestling match at Survivor Series 2005 between Trish Stratus and Melina, the latter of which came out looking fierce and foxy in white fluffy leg warmers. 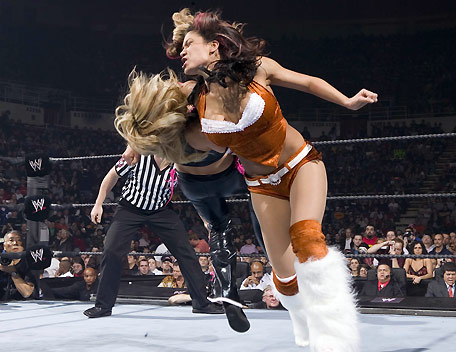 After seeing this, as if you wouldn’t want to wear white fluffy leg warmers. (SOURCE: WWE.com)

One time late last year I thought it’d be a jolly idea to dye my hair red, as in bright OMG MY EYES red. Everybody knows that someone with my skin complexion has a 2% chance of pulling off bright red hair. Why did I chance such a daring move then? Because Eva Marie has red hair, of course. If that woman jumped off a cliff wearing a burlap sack, I would join her and ask if she wanted a glass of water at the same time. One lovely hair dyeing session later with my fabulous hairdresser friend Kallie, and my hair was officially bright red. Some people liked it, some didn’t, and I was on the fence about it. But it didn’t matter, because I was one step closer to Eva Marie.

Let’s not even talk about my fascination with split-leg jeans or hot pants matched with Chuck Taylors and ripped punky shirts, because AJ Lee is clearly my inspiration for that. 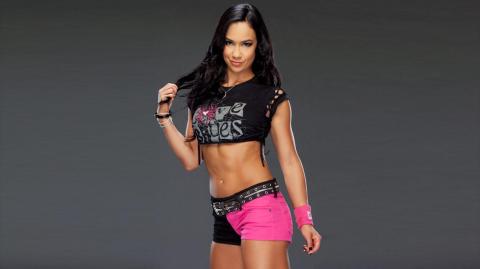 I imagine I wouldn’t look this skinny if I wore this outfit. (SOURCE: WWE.com)

I think this paints one clear picture about the type of person I am – I secretly want to be a WWE Diva. While I am very happy and content with being a man, I wouldn’t say no to being AJ Lee for a day. Oh, and if you’re a fabulous celebrity that specialises in wrestling, country music, Doctor Who or pole dancing, I am pretty much yours.